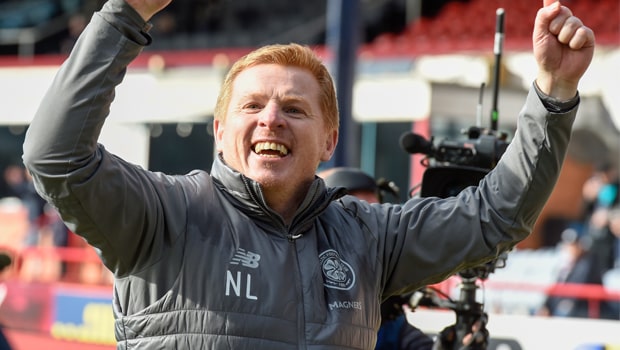 The Northern Irishman had been urging his side to keep going all the way to the end before Odsonne Edouard scored in the nick of time to take the champions 10 points clear of Rangers at the top of the table.

It had looked like Celtic would be denied by the dogged Taysiders until Edouard converted a James Forrest cut-back for a dramatic winner.

Interim boss Lennon said: “I said at half-time that we will wait until the 49th minute of the second half if we need and they were true to their word, they followed instructions out.

“The object of today was to win the game, we did that; go 10 points clear, we’ve done that, and now we can assess things in the next two weeks [during the international break].”

Celtic have eight remaining league games and their next, after the international break, is against Rangers at Parkhead – for which they are 1.85 in the match betting.

Lennon insists the pressure on his side has been eased by Sunday’s late win at Dens Park and that it might psychologically damage their bitter rivals.

“It means we don’t have to win it. Ideally we would love to and get over the line as quickly as possible but all the onus is on the other teams around us.

“The gap between first and second is bigger than between second and third which is again significant for us.”