Leigh Griffiths told to keep a lid on Ibrox celebrations 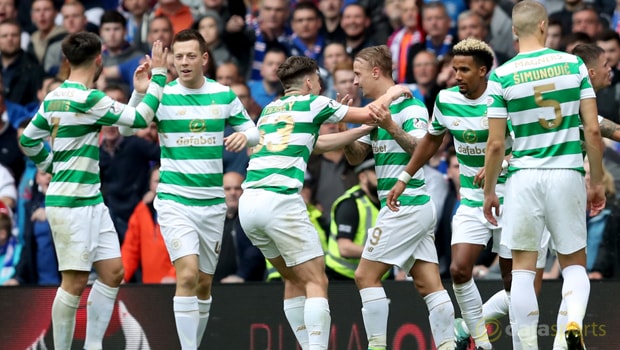 Leigh Griffiths was on target as Celtic maintained their superiority over Rangers with a comfortable 2-0 win in Saturday’s Old Firm derby at Ibrox, but the Hoops forward was warned to keep a lid on his emotions by boss Brendan Rodgers.

After a scoreless first half in which Rangers held their own, Celtic gained the upper hand in the second period.

Tom Rogic took advantage of some hesitant defending to fire the champions in front on 50 minutes while Griffiths ran on to a perfect pass from Patrick Roberts to rifle the ball past Wes Foderingham and double the lead not long after the hour mark.

The Scotland striker wheeled away in front of the jubilant Celtic supporters as he celebrated a 67th league goal in 100 appearances for the club.

He then milked the moment in front of the Rangers fans, together with skipper Scott Brown, and Griffiths has revealed it wasn’t just those in Light Blue that were taking exception to his expressions of joy.

Celtic boss Rodgers ‘lost it’ says Griffiths, and told his player to keep a lid on things in what was a powder-keg atmosphere.

“The manager has been calm most of the time he’s been here – that’s one of the few times he’s lost it,” said Griffiths.

“It wasn’t great to see, so hopefully I can stay on his good side now. The message was just to stay calm.

“At the start of the second half tempers were getting a little bit flared, so he just told me to keep the head and concentrate on my football.”

Griffiths was delighted with his contribution however and says he is now keen to focus on Celtic’s Champions League trip to Belgium to face Anderlecht on Wednesday.

“It’s a derby at the end of the day and I’m sure if Rangers players had scored at Celtic Park they would do the exact same thing,” he added.

“I enjoyed my goal – 2-0, clean sheet, three points and we’ll go down the road and look forward to Wednesday now.”