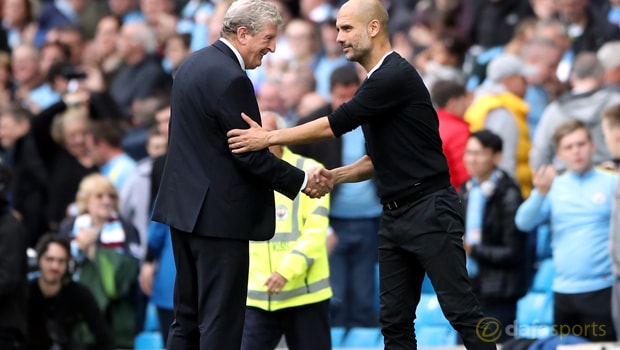 Manchester City may have won their second home Premier League game in succession 5-0 but it wasn’t enough to completely satisfy Pep Guardiola.

His side eventually cruised past bottom-of-the-table Crystal Palace at the Etihad Stadium, despite waiting until Leroy Sane’s goal on the stroke of half-time to break the deadlock.

Raheem Sterling scored twice in the second half while Sergio Aguero and Fabian Delph also netted as City took their tally to 16 goals in their last three Premier League matches.

But for Guardiola, they were guilty of allowing standards to drop during the opening half after a bright beginning.

“We started good, in the first five or ten minutes we created two or three clear chances, but after that we were not good,” he said.

“The ball should be moved and we didn’t move it. “The last ten minutes of the first half we started to play good again and it helped a lot to score the first goal before half-time. The second half we were at the level of the last few weeks.”

City have now won six games in a row in all competitions and sit top of the Premier League with a goal difference of plus 19 after only six games, level on points with neighbours Man United.

For Guardiola, it is vital that they continue to show strong form on home soil. “Last season we had a lot of problems at home winning games,” added Guardiola.

“That’s why we dropped our competition in the Premier League.

That’s why the last two games are so important – winning 5-0 against Liverpool and Crystal Palace – for our confidence and for the other games when we come back from the international break.”

Manchester City are now 1.67 to win the Premier League this season while Man United are 2.10.