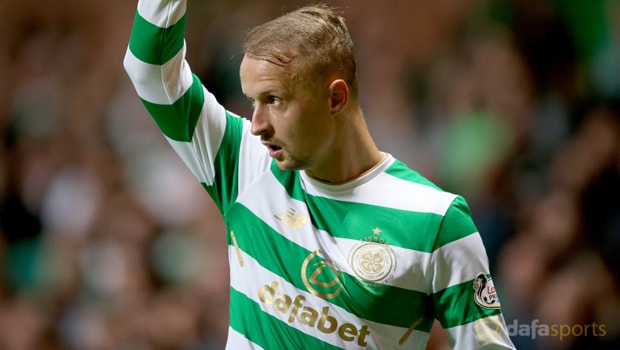 Leigh Griffiths feels Celtic have the quality to get past Astana and book their Champions League qualification place, though the striker admits it won’t prove easy.

The Kazakhstani side stand between Celtic and the lucrative group stage of Europe’s elite competition with the first leg set to take place in Glasgow on Wednesday evening.

Celtic edged past Astana in last season’s play-offs and Griffiths says they can draw both confidence and caution from that experience.

Crucially, he feels Brendan Rodgers’ has developed Celtic into a much stronger proposition now. “It will be a hard game. We know that from last year.

They gave us a really tough test and I think it will be the same again but it is up to us to prove that we belong in the Champions League. We’re under no illusions. It will hard but we feel confident,” said the striker.

“We will be prepared and I think we are a different team now to what we were 12 months ago.

It won’t be easy but we have built up all summer looking to get ourselves back in the Champions League and that is what we need now, one last big push.”

Celtic have come through two rounds of qualifying already, overcoming Linfield and Rosenborg without conceding a goal.

While winning the home leg cold prove a massive step towards qualifying, Griffiths insists it is important that Celtic approach Wednesday with the overall tie in mind.

“We won’t go into the game thinking that we need to get x, y or z,” said Griffiths. “Of course, we’ll be going out to win the game as we always do.

“We need to remember that it is a two-legged tie. We want to play as well as we can and do our job over the two legs and if we do that then hopefully the quality that we have got will shade it.”