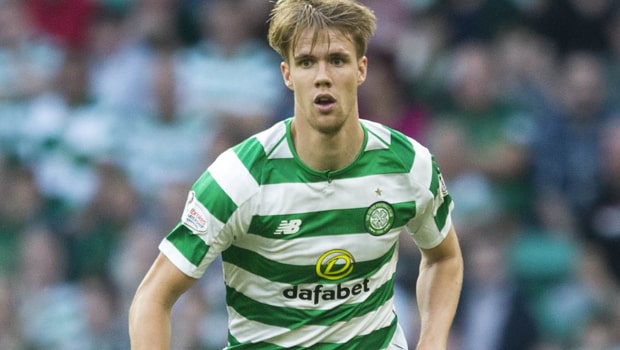 Kristoffer Ajer is thankful for the role played by John Kennedy in both his own personal development and following the recent upheaval at Celtic.

Assistant manager Kennedy has played a key role on the training pitch since Brendan Rodgers jumped ship to join Leicester City, though Ajer says interim boss Neil Lennon has also made his mark.

Ajer praised the impact of both Lennon and Kennedy in testing circumstances. “It’s been a really good week,” Ajer said.

“The gaffer’s come in and had a really good talk with all the players and told us about what he wants from us going forward. He’s been really good and we’ve seen that already with the two results in Edinburgh last week.

“John Kennedy has taken a lot of the training sessions but the gaffer has been here, putting a mark on how he wants it to be.

“The whole squad has really understood that everyone has their chance to prove themselves in training, and the level in training has been really good over the past week.”

Celtic face Aberdeen this weekend on home soil, armed with an eight-point lead over Rangers in the title race. Victory over the Dons would be another big step on the path to eight-in-a-row.

Ajer has reinvented himself as a central defender during his time in Scotland and he credits Kennedy with helping him to make that change.

“I have been working very closely with [him] for the three years I’ve been here, particularly on the defensive side of my game,” Ajer said.

“I changed position from midfield to centre-half, so I’ve been working with him very closely every single day after training – working on positional things and technical aspects – and he’s been fantastic for me throughout all my time here.

“So many times after the sessions, we’ve stayed out for half-an-hour, working on details and things I have to develop as a centre-half, and I’m really thankful for everything he’s done to me.”