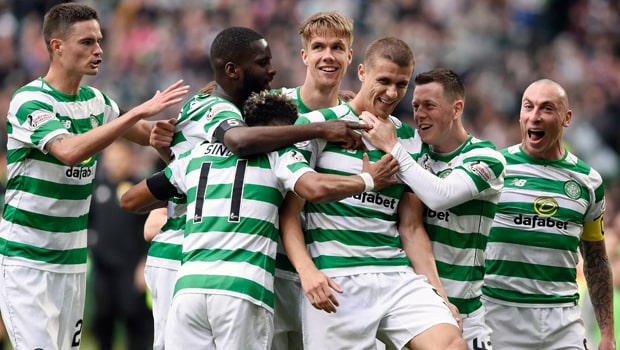 Kristoffer Ajer says Celtic must finish the season strongly and relish the key games that can see them crowned triple-treble winners in Scotland.

The defender insist that a season of hard work is all about putting themselves into a winning position for this stage of a campaign.

The Hoops laboured to a 1-0 weekend win over Kilmarnock in Glasgow, enough to make sure they lead Rangers by nine points with only three games remaining.

They go to Aberdeen this weekend knowing a point will secure their eighth Scottish Premiership title on the trot, while there’s also a Scottish Cup final against Hearts to look ahead to next month.

Ajer says this isn’t a time when players should be feeling fatigued after a long season, especially if they are in Celtic’s position.

“I don’t think it’s difficult at all. You play for so much at the end of the season. That’s why you play the whole season – to be in the position we are now,” he said.

“You just have to keep focused. We need to look to perform well against Aberdeen and in our last few games of the season. Hopefully we can stay focused and get the results we want.”

“Jozo and I have performed really well in recent weeks,” he said.