Frank Lampard: Momentum isn’t for me 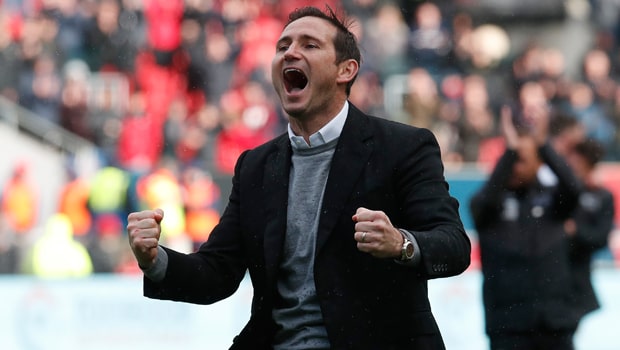 Derby County manager Frank Lampard says he gets ‘scared of the word momentum’ as his side closes in on a Championship playoff place.

The Rams have garnered ten points from their last four games and moved into pole position for sixth spot by winning 2-0 at playoff rivals Bristol City on Saturday.

They face Swansea City on Wednesday knowing victory will take them to the brink of a playoff finish, given their superior goal difference over seventh-placed Middlesbrough.

They are six goals better off right now but Lampard says winning in south Wales won’t mean they relax ahead of their final game at home to West Brom this weekend.

“It isn’t one more win [to clinch playoff spot], I have to say that,” Lampard said ahead of the trip to Swansea.

“On paper, for me, it’s four points needed, because that last day is going to be tense. Anything can happen in this league, so it’s not over until it’s over.

“Whatever happens, West Brom on the weekend will have a lot riding on it.” After only two wins in 10 games between early February and the start of April, Derby’s hopes of promotion were fading.

They’ve turned things around but Lampard will be wary of potentially entering the playoffs as the team ‘with momentum’ on their side. “I get scared of the word momentum,” Lampard said.

“I think momentum can make you relax when you start talking about it. “Without a doubt we need to keep calm and focused because we need to get more points to make sure.

“We are in a nice position and the feeling is good, but we need to focus.” Derby are 8.00 to be promoted this season.