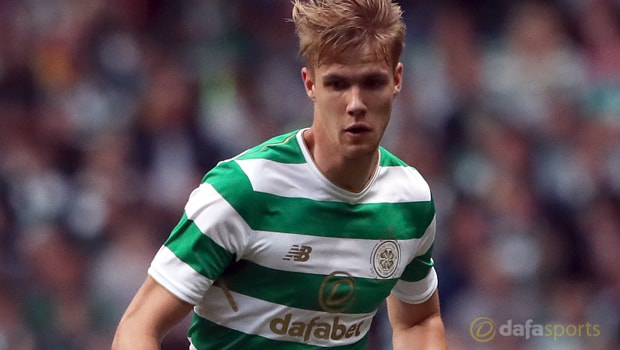 Kristoffer Ajer believes he has learned from his past mistakes and he is confident he can step up to the plate during Celtic’s Europa League tie with Zenit Saint Petersburg next month.

The Norway Under-21 international endured a night to forget on his last European appearance, as he played the full 90 minutes of the second leg of Celtic’s Champions League qualifier with Astana in August, a match that saw the Glasgow giants progress despite losing 4-3 on the night.

Ajer scored an own goal and struggled to show his true potential during that match, while he didn’t make a single appearance during Celtic’s group stage campaign in Europe’s premier club competition.

However, the 19-year-old has performed well on the domestic stage of late and he could well feature when Celtic return to European action next month when they take on Russian giants Zenit in the Europa League knockout stages.

Ajer’s chances of appearing in that match have been boosted by the departure of fellow centre back Erik Sviatchenko, while new signing Marvin Compper is ineligible for European fixtures.

The youngster is certainly hoping to feature against Zenit and he believes he has learned a lot about the European game following his toils in Kazakhstan during the summer.

“It was a really good game for me to look and learn from,” said Ajer, reflecting on the Astana contest.

“It was another experience for me. After the game we sat down with some of the staff and looked through my clips and learned a lot from it. We do that after every game and it’s about improving and learning from every aspect.”

Celtic will play host to Zenit in the first-leg of the tie on February 15 and they are priced at 2.60 to secure a victory from the match, while the Russian side are also available at 2.60 and the draw is on offer at 3.25.