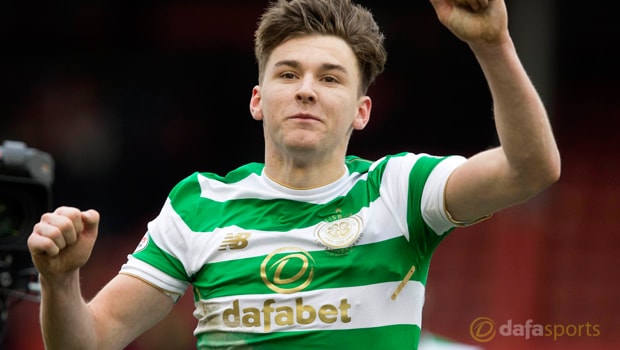 Kieran Tierney suggests winning a seventh successive Scottish Premiership title is the most important thing for Celtic this weekend – not beating Rangers to achieve it.

The Hoops welcome their city rivals to Parkhead on Sunday knowing that a win would secure the title.

It is almost 40 years since Celtic secured a league title by defeating their arch-rivals, so the feeling amongst Celtic supporters is one that suggests a chance is there to seize an historic moment.

Tierney, only 20-years-old, is wise beyond his years and he feels that winning the league is all that counts – suggesting the record books will never question where and when it was cemented.

“Of course [it would be nice to win league against Rangers],” said Tierney.

“But the biggest dream scenario is to win the league. I don’t care how we do it as long as we win it.

“In seasons down the line it’s not who you win the league against that goes in the history books it’s the fact you won it.”

Celtic swept Rangers aside earlier this month in their Scottish Cup semi-final, routing their rivals 4-0 at Hampden Park, but Tierney is prepared for a different challenge on Sunday.

He knows it could be an edgy affair, with Graeme Murty’s side desperate to stop the title party. Rangers have drawn both games against Celtic at Parkhead under their interim boss.

“The players are professionals, we know it’s not going to be an easy game,” he added.

“It’s not one of those games where we will necessarily score a lot of goals.

“We might only need one goal to win it if we defend well. It’s about preparing for every possible scenario in the game like we’ve done before.”

Celtic are 1.57 to win on Sunday while Brendan Rodgers’ team are 21.00 to record another 4-0 success against Rangers.