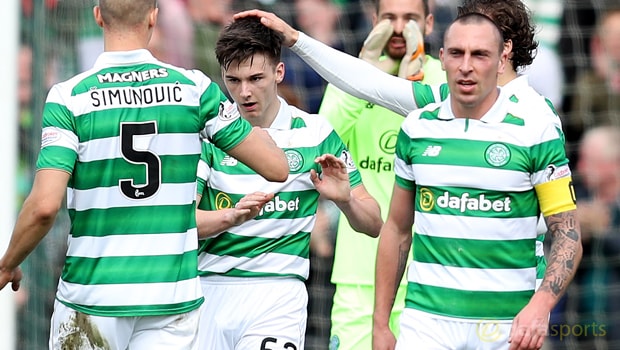 Exciting full-back Kieran Tierney says he won’t be distracted by speculation over his future this summer as he remains happy with Celtic.

The teenager has been a prominent figure under manager Brendan Rodgers this season, cementing his position as one of the most exciting young prospects to come up through the ranks in Scotland in recent memory.

A big-money move to England’s Premier League has been touted in the press but Tierney insists he won’t have his head turned this summer.

For now, he remains more than happy to continue learning his trade at the Scottish champions.

“You see stuff in the papers and on Twitter, people telling you and my friends as well, but I just need to concentrate on what I’m doing in training and playing well for Celtic,” he said.

“It’s easy for me because I’m happy where I am. I’m not thinking about anything else other than Celtic and just doing what I can for the team and helping us win every game.”

The Bhoys have yet to taste domestic defeat since Rodgers arrived last summer and Celtic stand just 90 minutes away from completing a first domestic treble in 16 years when they face Aberdeen in the Scottish Cup final later this month.

Tierney, 19, feels there is a lot more he can achieve in his development by staying under Rodgers’ watch in Glasgow.

“There is always room for improvement, especially me being so young. I have still got a lot to learn in the game and I’m working under a great manager and hopefully I can do that,” he added.

“You have seen what he has done this season and that’s him working with us for eight or nine months. It’s been remarkable what we have achieved this year and hopefully we can end the season on a high.”

Celtic are 1.73 to win away at Aberdeen in the league on Friday evening. The Dons are 4.75 to pierce Celtic’s unbeaten record, while the draw is 3.75 at Pittodrie.