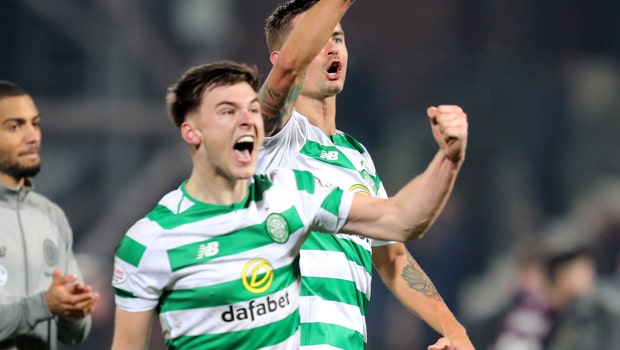 Celtic’s Kieran Tierney says that he is fit for the Scottish Cup final against Hearts at Hampden Park on Saturday.

The left-back is due to have an operation on a double hernia next week that will rule him out of Steve Clarke’s first Scotland squad, with the Scots playing Cyprus and Belgium in 2020 European Championship qualifying.

The 21-year-old says that is a blow, but he is looking forward to being part of a Celtic team that will seal a third successive treble with victory at Hampden.

Tierney said: “I have been training the last two days and that is the hard two days. I think I have coped quite well with that so it is positive going into the game.

“I would love to go away with Scotland but unfortunately the operation is booked for a few days after the cup final so that would rule me out.”

He was frustrated at missing out for Scotland as it will be Clarke’s first games in charge after replacing Alex McLeish.

The boss took Kilmarnock into Europe for next season but left this week to join Scotland on a deal until the 2022 World Cup. Tierney says he is looking forward to working with him as soon as possible.

“We all know what he is about and how good he is and that’s why everybody is so looking forward to working under him and why I am gutted that I won’t have the chance to make a first impression on his first squad,” he added.

Celtic are 1.33 to win the Scottish Cup final on Saturday and seal that historic third successive treble, with Hearts on offer at 9.00.

Meanwhile Dundee United and St Mirren meet in the Scottish Premiership playoff final first-leg on Thursday, with United 2.30 to gain the early advantage and Saints 3.10. The second leg takes place on Sunday.