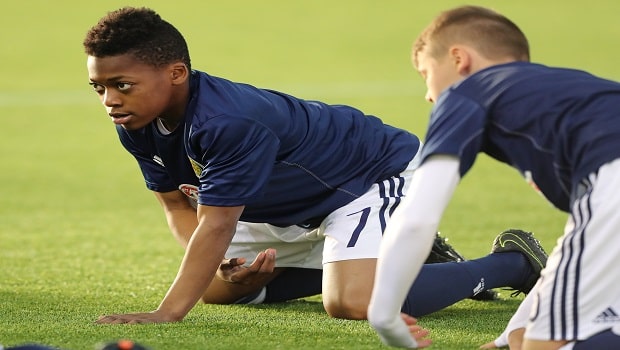 Karamoko Dembele says he is looking forward to seeing what the future brings after signing his first professional contract with Celtic at just 15 years of age.

England Under-15 international Dembele joined Celtic’s youth ranks in 2013 at just 10 and is one of the most highly-rated youngsters at the Scottish champions.

The winger made a name for himself in October 2016 when he made his Under-20s debut against Hearts at just 13, coming off the bench for a side then seven years above his age group.

Celtic have now decided to hand Dembele a first pro contract until 2021 and the rising star is eager to continue his journey at Parkhead, with his major goal to break into the senior side.

“It means a lot to me to start my professional career at Celtic,” he told the team website.

“I came here at a young age and after all the stuff me and family have been through together, it’ll be good to make them proud. “I’d like to say thank you to everyone and I’d like to thank everyone for everything they’ve done for me.

I’d also like to thank everyone for the training I’ve received, the discipline I’ve been taught and the advice I’ve been given all the way. “Getting attention at a young age has been hard but I’ve obviously had my family to help me through that.

You need to be strong mentally, you need to stay grounded and you just need to get on with everything that you do on a daily basis.”

Celtic, who are aiming to complete the treble-treble this season, are also battling for silverware in the Europa League and have been drawn against Valencia in the last-32 stage.

The first leg takes place at Parkhead on February 14 and the hosts are 3.40 to pick up the win, the draw is priced at 3.50 and the visitors are 2.15 favourites.