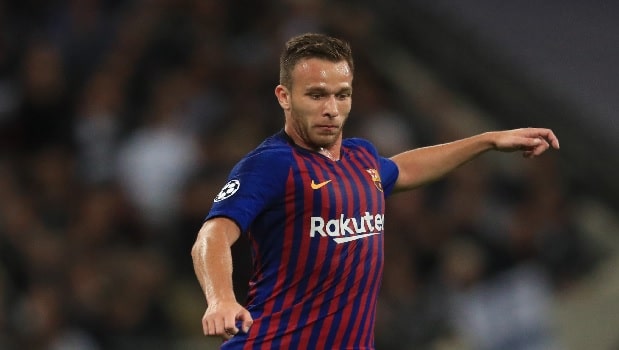 Barcelona midfielder Arthur Melo says he would be very happy if Neymar left Paris Saint-Germain in the summer and made the move back to the Camp Nou.

PSG smashed the world-record transfer fee in 2017 when signing Brazil international Neymar for a massive 222million euros, a deal that sent shock waves throughout the sporting world.

The 26-year-old scored 19 goals from 20 Ligue 1 appearances in his debut season before a foot injury – which left huge doubts over his fitness for the 2018 World Cup in Russia – brought a premature end to his domestic campaign.

His performances for Les Parisiens this term have been of the highest quality once again, with the forward finding the back of the net 11 times from 12 league matches, while he has scored five goals in the Champions League.

However, reports continue to link Neymar with a return to the Camp Nou and compatriot Arthur, who has played in 11 La Liga games since joining the Catalans in the summer, is hoping the rumours come true.

“I’m actually praying for him to come because he is one of the best, there is no doubt about it,” he said. “If we keep getting better players, the team will be even better.

“I really want him to return here but he has his life and there’s only one man who knows if that negotiation would take place – and that’s him.
He’s a personal friend of mine and I really admire him, I’d be quite happy if he returned.”

Barca return to action on January 6 when they make the trip to Getafe, while PSG, who are firm 1.01 favourites to retain their Ligue 1 crown, take on Pontivy GSI on the same day in the Coupe de France.