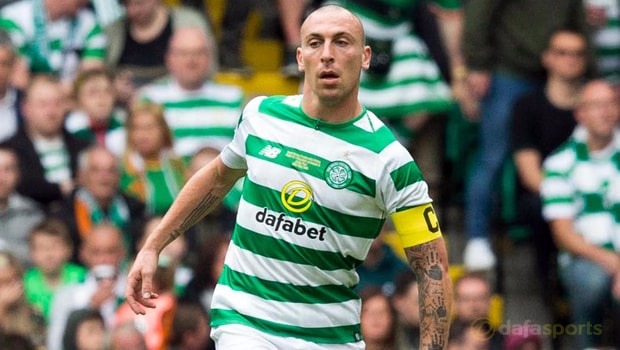 Former Celtic man John Hughes insists Scott Brown will be excited as he prepares to do battle with Aberdeen’s Graeme Shinnie and Rangers’ Scott Arfield.

Brown has been one of the best midfielders in the Scottish Premiership for the last decade and he has helped the Hoops win the league title for the last seven years.

Next season, Celtic, Aberdeen and Rangers are expected to challenge for the title and Brown will once again be expected to battle with Dons star Shinnie.

The pair clashed on the last day of the season after some strong tackles, while Arfield has recently joined the Gers to work under new coach Steven Gerrard.

Some titanic tussles are expected in Scotland next season and Hughes insists it will bring the best out of Brown.

He told the Daily Record: “Broony will be rubbing his hands. He will respect the fact someone is going to get stuck in about him.

“It’s part and parcel of the game. You give it out and take it. And Scott has been fantastic. You want him in your team every week. He has adapted his game and become a real footballer.

“He’s the best midfielder around. No question. And getting better as the years go by. He won. Player of the Year and you look at the Old Firm games, when the scrutiny is on, and he’s man of the match.

“As a young player he was box to box, really high energy – now he has adapted he can come off, start the play and drop between the centre-halves. He can still bomb on now and again and is still on the high press.

“So as a fan of the Scottish game I’m intrigued at what happens when Arfield and Shinnie go toe-to-toe with him.”