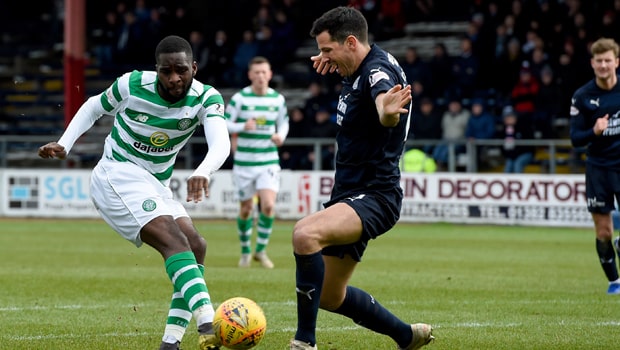 John Hartson believes there should be more to come from Celtic’s record signing Odsonne Edouard.

The French forward was signed for a club benchmark £9m from Paris St-Germain last summer after a successful loan stint in Glasgow last season.

With Moussa Dembele departing in August and Leigh Griffiths absent through much of this season, Edouard has carried the burden goalscoring responsibility for the Hoops.

Recent dramatic late winners from Edouard at Hearts and Dundee have ensured Celtic’s pursuit of an eighth Scottish Premiership crown in a row is firmly on track, though Bhoys legend Hartson doesn’t yet believe the youngster has started to fulfil on his promise completely.

“I don’t think you can criticise a guy who has netted 18 goals this season and have got you out of jail twice with last minute goals in recent weeks, but I do think there is an element of frustration about him at times too,” said the Welshman.

“He has pace, he has strength, he can score – he does have all the tools to really be a first-class striker. But I just keep thinking that there is so much still to come from him.

“There is an element of frustration to watching him sometimes because you just feel that if he tidied up one or two aspects of his game then he would be a really serious player for Celtic.”

Hartson suggests it is in the European arena where Edouard has come up short so far, something current interim Neil Lennon wouldn’t have tolerated in his own Hoops playing days.

“In too many of the European games the ball seemed to come off of him and at that level you just can’t afford to do that,” he added.

“I always remember from my own time at Celtic that if I gave the ball away, Neil Lennon would always be the one who would have a go the minute we stepped foot in the dressing room at half-time.”

Celtic host Rangers in their next league game. The champions are 1.85 to win that clash, with Rangers 4.20 and the draw 3.60.