John Hartson backs Brendan Rodgers to come out of ‘slump’ 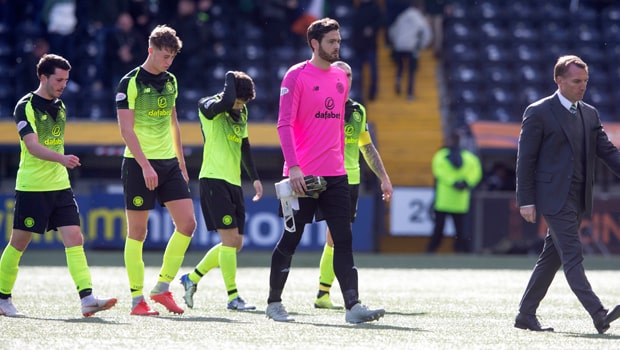 Former Celtic striker John Hartson says his old club are “not in crisis” despite their worst start to a league season for more than two decades.

The Welshman also insists that anyone criticising manager Brendan Rodgers should think again, with Hartson content that the Bhoys will come out of their current ‘slump’.

Celtic were beaten 2-1 at Kilmarnock on Sunday while Steven Gerrard’s Rangers side cruised past St Johnston at Ibrox to move above the Hoops in the league table.

The Light Blues can rightly be delighted with their current situation, but Hartson has warned Rangers fans there is a long way to go.

“There’s no doubt the Rangers support cartwheeled their way out of Ibrox on Sunday night,” he told the Evening Times.

“It’s quite a while since they could look over their shoulder at Celtic in the league table.

“They are more than entitled to enjoy their time in the sun. I just don’t think I’d get too comfortable with the view. Celtic are not a club in crisis.”

Hartson feels Celtic’s track record in two seasons under Rodgers’ steer demands that they be given time to turn around their slow start to the new season.

A trip to St Johnstone in the League Cup is next up on Wednesday night for Celtic and Hartson does concede there is an element of pressure on them at McDiarmid Park.

“It is a slump in form and there is a lethargy about the team just now. I don’t think there is any doubt about that,” Hartson added.

“This is a team that have been untouched domestically for two seasons. They have two trebles sitting proudly in the trophy cabinet.

“So before anyone starts getting too excited I think you have to give Brendan Rodgers his chance to go and arrest the decline in form.

Celtic are 1.44 to beat St Johnstone on Wednesday. The home side are 6.50 to end Rodgers’ stranglehold on domestic silverware while the draw is 4.33.