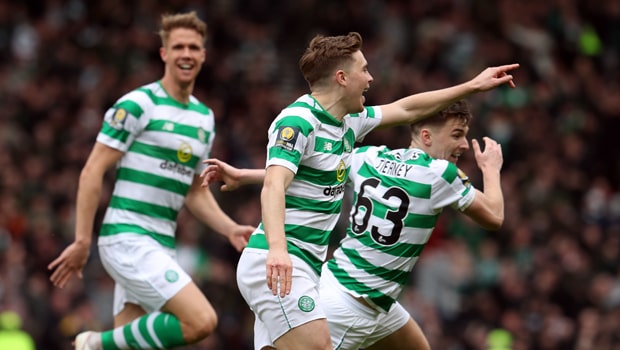 Celtic ace James Forrest says his side will be on a revenge mission when they prepare to take on rivals Rangers at Ibrox on Sunday.

The Hoops have already wrapped up the Scottish Premiership title with two games still remaining.

Their victory over Aberdeen on Saturday clinched their eighth straight crown but they still have to play their biggest rivals one more time. Celtic won the last meeting in March 2-1, but on their last visit to Ibrox they came away with nothing after losing 1-0.

That defeat in December took some getting over and Forrest admits it was at the front of their minds during their January training camp in Dubai.

Although the league title is already in the bag, Forrest says he and his team-mates cannot wait to set the record straight.

He told The Herald: “Going into the winter break, when we went to Dubai, it wasn’t the same because we left after what was such a bad result, but more importantly such a poor performance.

“I think what made us play so well when we came back was the fact that everyone was still really hurting from that game.

I am sure when it comes to Ibrox the boys will no doubt be thinking about the last time we went there.

“Whoever is in the squad – whoever plays that game – will want to make sure it doesn’t happen again.

We need to make sure we finish the league strong, not let it peter out. We want to give ourselves confidence for starting the season again by finishing strong this time.”