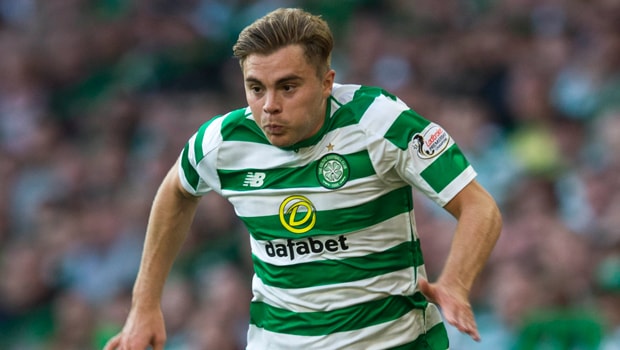 Celtic winger James Forrest conceded it was ‘scary’ to be told he had now amassed more European appearances for the Hoops than club icons Bobby Lennox and Billy McNeill.

Forrest racked up his 71st appearance in continental competition on Wednesday as Celtic came from behind to beat Rosenborg 3-1 in their Champions League qualifier in Glasgow.

The Scotland international admits it is a funny feeling to have surpassed two Parkhead legends, but he is keen to keep going strong.

“I wasn’t aware of it (that he had made more European appearances than McNeill and Lennox) and just found out,” he told the Celtic View.

“It’s scary and I don’t know what to say, to be ahead of people like that. You come through the youth at Celtic and you just want to make your debut, but I’ve now played a good number of years in the first team and I’m enjoying every minute of it.”

With five more games standing between Celtic and the group stages of Europe’s elite competition, he’ll get ample chance to add to his tally in the coming weeks.

He is understandably eager to get back into the big-time games of the group stage, where he has enjoyed facing the likes Barcelona, Paris St-Germain, Manchester City and Bayern Munich in recent times.

“I want to keep going, and this makes me want to keep playing more games and continue enjoying playing for this club. I’m just looking forward to continue doing that and working as hard as I can,” he added.

“I’ve been involved in a few big games and it’s hard to pick out one or two as there’s been that many good ones.

We’ve put on some good performances against some big teams here and the atmosphere has been unreal.”