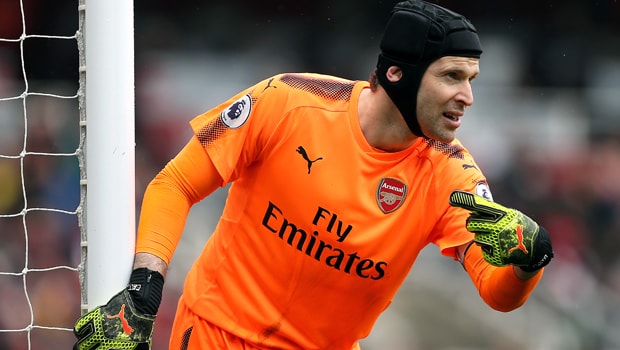 Petr Cech says he is determined to fight for his place in Arsenal’s starting line-up despite the recent capture of Bernd Leno from Bayer Leverkusen.

The veteran Czech Republic shot-stopper has been the Gunners first-choice goalkeeper since he arrived from London rivals Chelsea three years ago.

New boss Unai Emery moved quickly to snap up Leno for £22million this summer, with signs last season that perhaps Cech, 36, was starting to falter.

Cech holds the record for the most clean sheets in the Premier League and he insists he is far from finished.

“At the start I said I want to fight for my place in this team, I will honour my contract unless the club tells me to go,” he said.

“I’m performing every day, I’m trying to train hard and [to be] ready when my opportunities come. Obviously, I want to show the manager that I can be the starting goalkeeper.

“All the goalkeepers in our club do the same, all the players in their position do the same and it’s great for the team.”

Since succeeding Arsene Wenger as Gunners boss, Emery has been re-building his squad at the Emirates Stadium.

Stephan Lichtsteiner, Sokratis Papastathopoulos, Lucas Torreira and Matteo Guendouzi have all coming in while the likes of Per Mertesacker, Santi Cazorla and Jack Wilshere have been allowed to leave the club.

The new manager is currently working on securing the future of Aaron Ramsey, who has just one year left on his current contract.

Emery enjoyed a fine 5-1 win over former club Paris St-Germain in a pre-season friendly in Singapore on Saturday, with Alexandre Lacazette (2), Mesut Ozil, Rob Holding and Eddie Nketiah all scoring.

Arsenal are 3.30 to defeat champions Man City in their Premier League opener at the Emirates on August 12 while they are 23.00 to win the title.