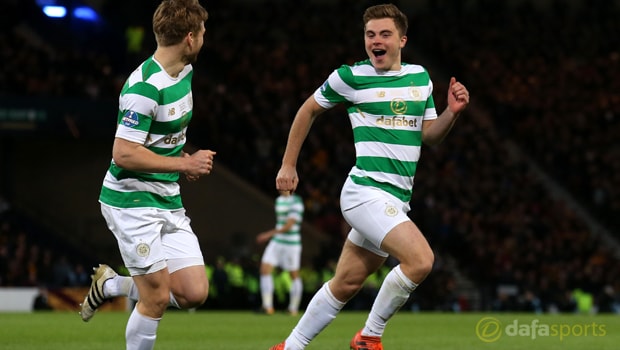 Celtic winger James Forrest insists the squad are not talking about claiming another treble this season after lifting the League Cup at Hampden on Sunday.

The Bhoys have been the dominant force in Scotland over recent years, winning the league title in each of the last six seasons, while they boast 48 Scottish league titles overall.

Brendan Rodgers’ arrival ahead of the 2016-17 campaign brought about a renewed excitement with the fans following Ronny Deila’s exit and the Northern Irishman hasn’t let them down.

The 44-year-old led Celtic to a treble of league, Scottish Cup and Scottish League Cup in the first term at the helm.

Celtic picked up their first piece of silverware for 2017-18 on Sunday with a 2-0 victory over Motherwell in the final of the League Cup and they look very likely to finish the season with another treble.

The Celtic Park outfit already sit three points clear at the top of the table with a game in hand and they will face Brechin in the Scottish Cup fourth round in January.

However, Forrest, who netted in Sunday’s showpiece event at Hampden Park, insists the players aren’t talking about claiming another hat-trick of trophies.

Forrest said: “We’ve not even spoken about that. “We’ve got that many games every couple of days so we just concentrate on one at a time and we’ll take it from there.”

The 26-year-old academy graduate was handed a starting role for the cup final after performing consistently over recent weeks and he has revealed his delight at getting the chance and also scoring.

He added: “We’ve played a lot of big games this season and this is what you want to do. “You become a better player playing in big games.

“I’m just delighted to have scored the goal, helped the team and get the trophy.”

Celtic are priced at 1.29 to make it back-to-back victories over Motherwell, who are priced at 10.00 to get revenge when the two meet in the league at Fir Park on Wednesday, while the draw is priced at 5.50.