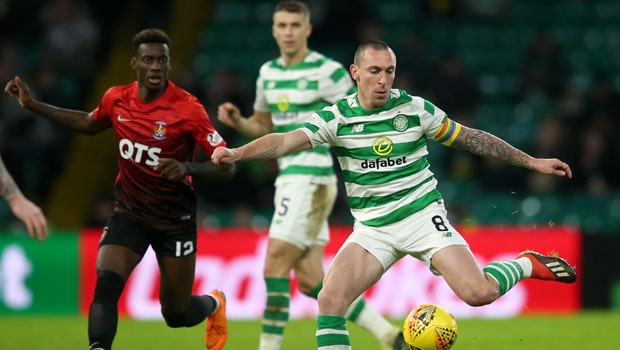 Celtic captain Scott Brown may have to wait to get his place in the team back, according to manager Brendan Rodgers.

The Hoops’ influential skipper has spent the last month on the sidelines, and, while now fully fit again, has not been able to immediately reclaim his place in the starting team.

The midfielder was on the bench for recent key games in the Europa League at Rosenborg and the League Cup final against Aberdeen.

Brown started as Celtic faltered in a midweek 1-1 draw away at Motherwell, after which Rodgers was critical of those players that came in from the cold.

The 33-year-old was again omitted from the starting team on Saturday as Celtic knocked Kilmarnock off top spot in the Scottish Premiership with a convincing 5-1 win in Glasgow.

Rodgers praised those players that are doing well in the engine room and hinted it may be the same again for Thursday’s decisive Europa League game at home to Salzburg.

The Parkhead boss says he cannot rely on ‘sentimentality’ to choose his team.

“I have compassion for players, especially for ones who done amazingly for me, but what I don’t have is sentimentality,” said Rodgers.

“It’s very clear for me that if a team’s playing well, that’s where it’s at.

“We don’t rely on just 11 players, we need more than that. It’s clear for me the level and fluency of the team was great. My job is to pick a team that can win games and win titles.

Callum McGregor and Ryan Christie, along with Tom Rogic, have been exceptional, not just in their football but how they press the game.”

Celtic are 2.30 to beat already qualified Salzburg on Thursday. The Austrians are 3.00 while the draw – which would send the Bhoys into the last-32 – is priced at 3.40.