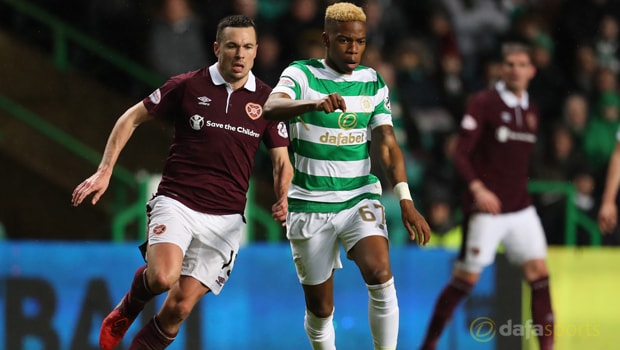 Celtic defender Dedryck Boyata believes compatriot Charly Musonda has the attributes to be a huge success during his 18-month loan spell in Glasgow.

The highly-rated Belgian attacker made the move to the Scottish champions this week from Chelsea and quickly impressed when he came off the bench in Tuesday’s 3-1 home success over Hearts.

Boyata has already been able to watch the 21-year-old develop through his teens and he has no doubts that Musonda can be a Parkhead success story.

“I’ve known Charly since he was around 14 or 15,” said Boyata. “He’s a very talented player so it’s good for him to be here and be able to play some games.

“The few minutes he played showed that he’s skilful and very quick, and his football knowledge is very high. I say that because I know him very well, so I know how he thinks and how clever he can be. He’s very skilful and can score goals so he has a lot of abilities.”

Musonda revealed this week that coming to work under Hoops boss Brendan Rodgers was a big selling factor in his decision to join Celtic, with a move having been close last summer.

Boyata feels Rodgers’ work with the likes of Moussa Dembele, Patrick Rodgers, Odsonne Edouard and Olivier Ntcham bodes well for the sort of development that Musonda can hope to see during his time in Glasgow.

“We have a manager who can develop young players. You see what he did with Moussa, Patrick and now Odsonne and Olivier,” added the central defender.

“The manager can see every day how he can improve them. It’s difficult to be in a big team if you don’t play. Playing games can give you more experience and coming here, Charly is going to get as many games as he can and he’s going to be better.”

Musonda could get his first Celtic start on Saturday at Kilmarnock, where the Bhoys are 7.00 to win 3-0.