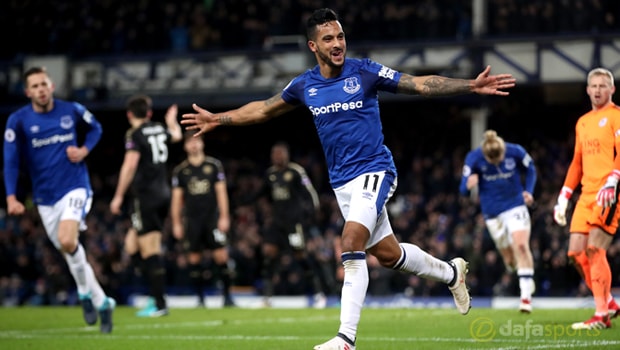 Everton manager Sam Allardyce feels Theo Walcott is already paying back the club’s faith in him after a match-winning brace against Leicester.

The England international swapped Arsenal for Goodison Park last month in a deal worth £20m.

On Wednesday evening he netted both goals in the first half as the Toffees recorded their first win in eight games in all competitions.

It was just Walcott’s second appearance in an Everton jersey and Allardyce is happy to be seeing an immediate return on his investment.

Walcott, 28, had been at Arsenal since his teens and his new manager feels he has a determined player on his hands having made a high-profile switch at this stage in his career.

“He has got something to prove and this is a big transfer at this time of his career,” said Allardyce. “He has started to pay us back immediately.”

There was a second boost for the Everton boss on the night as Seamus Coleman returned to first-team action ten months after suffering a double break in his leg while playing for the Republic of Ireland in a World Cup qualifier against Wales.

Coleman turned in an impressive performance and provided attacking width for Everton down the right flank, where Allardyce is keen to see a partnership develop with Walcott.

“It was like having a new player,” Allardyce said. “He is the example of a perfect professional and someone for every youngster at Everton to look up to.

“He has been out for months and plays like that. Imagine what he will be like when he is match fit – it’s scary.

“A new partnership is born – Theo Walcott and Seamus Coleman down the right. That combination was really good.”

Everton are 11.00 to win at Arsenal on Saturday, with Walcott 4.20 to score anytime against his former club.