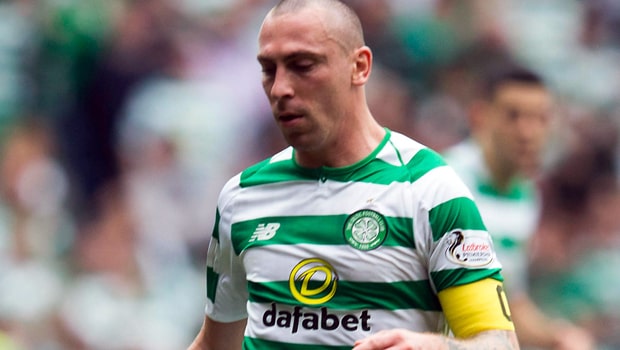 Former Hoops striker Chris Sutton says it would be almost unthinkable if Scott Brown was not installed to Celtic’s starting 11 immediately after he returns to full fitness.

Brown has struggled with injury this season and his latest knee issue has kept him out of action since the end of October, with his most recent appearance coming in the 4-2 victory over Hibernian on the 20th of last month.

In his absence, players like Callum McGregor, Ryan Christie and James Forrest have all stepped up to the plate and shown great leadership and determination to control the midfield.

With the trio impressing so much, questions are being asked about the captain’s place in the starting XI and whether he should be demoted to the bench when he returns to full fitness.

However, Sutton, who played at Parkhead from 2000-2006, believes manager Brendan Rodgers would be crazy not to put the skipper back into the mix straight away. Writing in his Daily Record column, he said.

“Scott Brown has been the leader and the driving force behind back-to-back Trebles at Celtic.

And while it has been a huge bonus to Brendan Rodgers and the supporters to see the way the midfield has evolved during his injury absence, you’d be off your head to send him to the knackers yard.

“It’s crazy to think he’s not going to be No.1 influence in the Celtic side as soon as he’s fit enough to get going again. Two or three good results and performances don’t change that fact.

Can you imagine a Celtic lined up being named and Brown sat there on the bench at kick-off after being named as a sub? No? Me neither.”

Celtic return to action on Saturday when they make the trip to Hamilton Academical and the visitors are 1.20 favourites to win, a draw is priced 7.00 whilst the hosts are 15.00 outsiders.