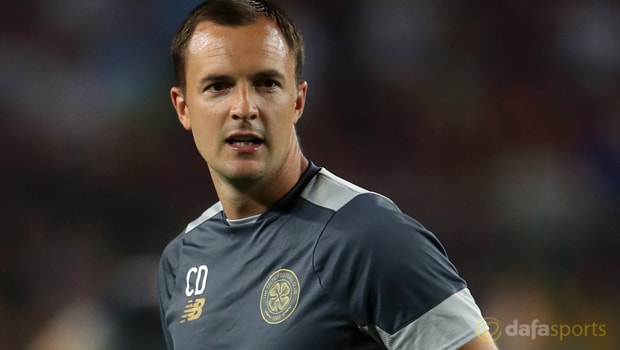 Celtic assistant manager Chris Davies insists the club are fully focused on securing a place in the Europa League after their chances of progressing in the Champions League were ended during the week.

The Bhoys were narrowly beaten 2-1 by Bayern Munich at Parkhead on Tuesday, a result that ended their chances of reaching the knockout stages of Europe’s premier club competition, but they remain well placed to fall into the Europa League with two rounds of fixtures still to play.

Brendan Rodgers’ side are currently third in the group, three points clear of Anderlecht, with the two teams set to meet in Glasgow in a potentially pivotal match next month.

Before that contest Celtic must first negotiate a trip to Parc des Princes to take on group leaders Paris Saint-Germain and Davies admits his side still have a lot of work to do if they are to fulfil their goal of securing European football for after Christmas. “Anderlecht are a good team,” Davies said.

“They were good but we were even better on the night (in Belgium), but it’s not taken for granted that we’ll be in the Europa League.

Davies knows Celtic will face a tough test of their credentials if they do qualify for the Europa League, with European heavyweights such as Arsenal and Lyon currently competing in the competition.

He added: “The Europa League is a very difficult competition, and there are some top teams in there – the likes of Arsenal, who have got the same budget as Bayern Munich, Lyon, who are one of the top teams in France, and Lazio, who are doing really well in Serie A – so we would need a good draw and a bit of luck.”