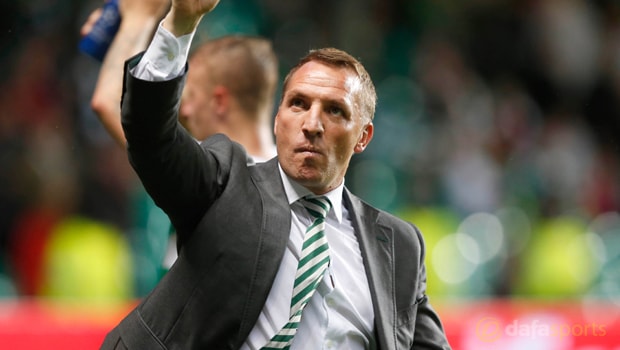 Having qualified for the Champions League group stages, Celtic boss Brendan Rodgers now wants his team to still be in Europe come the New Year.

The Celtic boss hailed the achievement of his side coming through three rounds of qualifiers to reach the lucrative group stage for the second year running, after they ousted Kazakhstani champions Astana 8-4 on aggregate, despite losing the second leg 4-3 on Tuesday.

Joining Europe’s elite for the group stage was a key target for Rodgers and his treble-winning squad and, having negotiated their way through, the Northern Irishman has quickly established his side’s next goal.

“The first thing was to qualify. It’s a big achievement with the route that we have to take and the games we have to play.

That was the first target,” Rodgers said. “What we would like to do is try to progress this year and be in European football after Christmas.

We are coming into the highest level and we are going to play against some fantastic players. “The players are only going to improve and get better and get better experience.

If we can then be in European football after Christmas that will be another great step forward for us.”

There were some moments of concern for Rodgers when Astana led the second leg 4-1 with 25 minutes remaining but goals from Olivier Ntcham and Leigh Griffiths settled the tie comprehensively in Celtic’s favour.

It hasn’t been a straightforward process qualifying, and Rodgers credited his players for handling the games so well.

“So the players have done absolutely magnificent and it’s another good learning game for us because we would want to be better than that defensively.”