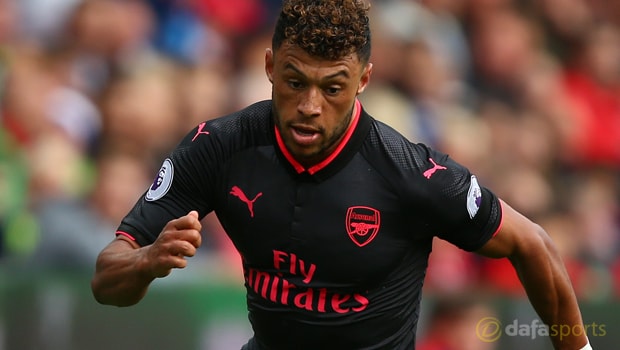 The Gunners man is no closer to signing a new deal with the club and has been linked with Premier League rivals Liverpool and Manchester City this summer.

Oxlade-Chamberlain is one of three key Arsenal players whose deals run out next summer but Wenger says he still hopes that the England man – along with Mesut Ozil and Alexis Sanchez – can be convinced to extend their contracts.

“We always hope, even now, that we can extend the contracts of Sanchez, Chamberlain and Ozil,” said the Frenchman.

Reports have suggested that Oxlade-Chamberlain will meet the Arsenal hierarchy this week to sort his future.

Wenger has been happy with the player’s progress in recent times and is predicting the midfielder can become one of England’s key men over the next two years, and he wants that progress to happen while he is still an Arsenal player.

“I rate him highly and he’s one of the players who is on his way up,” Wenger added.

“In the last year, he has made huge progress and I want him to stay here for a long time.

“I’m convinced he will be the English player that everybody will look at in the next two years.”

He joined the Gunners from Southampton in 2011 for a fee rumoured to in the region of £12m and has won 27 England caps, scoring six times for the Three Lions.

Arsenal are 15.00 to win the Premier League title this season, while they are 3.30 to win away at Liverpool on Sunday.