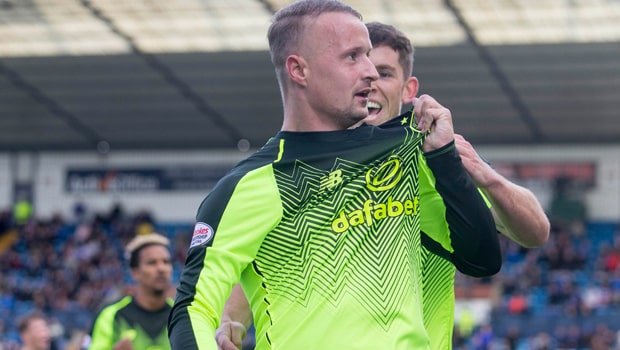 The Scotland international has scored more than 100 goals in a Celtic jersey and he was rewarded this month with a new four-year deal at Parkhead.

Griffiths has played second fiddle at times to former Hoops forward Moussa Dembele, while he’s now battling another Frenchman, Odsonne Edouard, for a starting berth in Brendan Rodgers’ side.

On Thursday evening, Griffiths replaced Celtic’s club-record signing Edouard with 15 minutes left and duly scored the only goal of the game in a much-needed 1-0 Europa League win over Rosenborg.

Reflecting on that game, the 28-year-old suggested his critics should take a look at his record.

“I’ve done it for years,” he said, reflecting on his match-winning contribution.

“I don’t know why people keep doubting me and say I can’t score goals in the big occasion.

“I’ve done it in the Champions League, the Europa League, the League Cup, the Scottish Cup and the league.

“There are still people out there doubting me and saying that I can’t do this and that. But I keep shutting people up.”

Griffiths says he is prepared to juggle for playing time with Edouard, as Rodgers’ remains faithful to playing a lone striker up front, with the forward conceding neither player is likely to start every week.

“I don’t think there is going to be a designated No.1 striker,” he said.

“I think the manager and will chop and change who he goes with depending on the opponent.

“Regardless of anything, I need to keep working hard in training and do my job so that when I come on off the bench or start games I need to put in performances.”