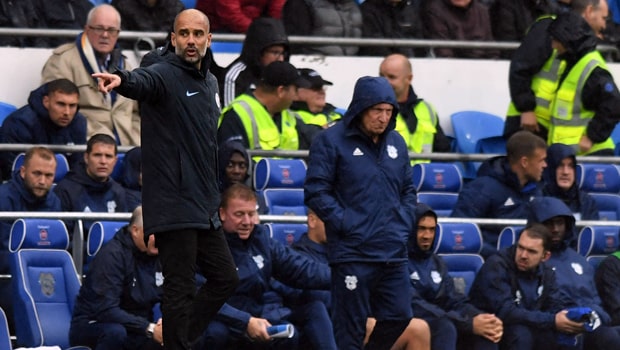 Pep Guardiola said he is there to support his Manchester City squad when they have moments of doubt after they thumped Cardiff City 5-0.

The Citizens were humbled in midweek by Lyon during a 2-1 Champions League defeat at the Etihad Stadium. Guardiola was serving a touchline ban in that game, unable to communicate with his team after they arrived at the stadium.

Asked about his return to the dugout the Spaniard suggested that it had little to do with the turnaround in performance, instead choosing to heap praise on his players.

“I don’t play. The managers, we are there to be there when they have little doubts, to support them,” Guardiola said.

“I don’t know what’s going to happen with that guys. It’s the same group, they keep reacting, an exceptional group. They know how, when the situation is not good in terms of results, the closer I am to them.

“They deserve all my respect.” Riyad Mahrez, signed for £60m in the summer from Leicester City, fired a brace in the second half at Cardiff, his first goals in a City shirt.

Guardiola was impressed and suggested that the playmaker, along with talented youngster Phil Foden, will get his opportunities to feature in the first-team the longer the season goes on.

“It’s good to get the first goals,” Guardiola said.

“Of course it’s important for him. He came here, he’s an incredibly talented player. He deserves to play more minutes, like Phil Foden.”

“It’s a pleasure to watch Phil play football and of course Riyad as well,” Guardiola continued.

“But the season is too long and they have to be ready, prepared, because they are going to play a lot of minutes.”

Man City are 1.70 to retain the Premier League title this season while Liverpool, with six wins from six games, are now 2.70.