Posted by Olumide Akinnifesi on February 18, 2020 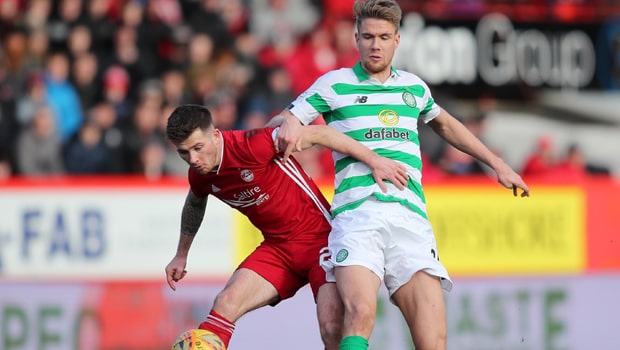 Celtic continued their 10 point dominance on the league table as Steven Gerard’s men refused to give up with a slim 1-0 victory over Livingston at the Ibrox ground later that afternoon.

It was a hard-fought win for the Scottish champions- Celtic, as they were made to work hard for their win over Aberdeen in the SPFL.

Celtic have recorded a maximum of nine points from their league meetings against Aberdeen this season, which includes a  4-0 and 2-1 victories back in October and December, respectively. The Hoops had to wait till the 81st minute to secure a win from Kristoffer Ajer’s header.

Celtic are now eleven games away from winning another historic title, which could see them win ninth in a row, and Ajer’s late goal just pushed them a step forward towards achieving that.

The defender revealed during an interview on the club’s website that beating Aberdeen on their home turf was going to be an uphill task, and they were glad they made something out of the game.

“They were all over us as they pressed high up the pitch and forced us to build play from the back as they tried to create their chances by performing at a high level. But we always knew we had the right mindset to win games as we switched to a back four to affect the game positively”.

There is every reason for that game to be challenging because Aberdeen made it tough for Celtic, and they could have as well earned a point. Joe Lewis was brilliant as he proved a tough nut to crack in goal for the Hoops but couldn’t, however, keep Ajer’s effort from going in.

Celtic will look to replicate their form in the Europa League, where they will travel to face Danish side Copenhagen.