Posted by Akinnifesi Olumide on August 30, 2022 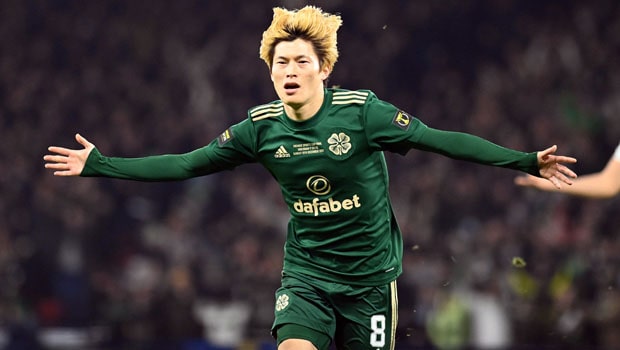 Celtic forward Kyogo Furuhashi has prioritised for himself an expectation of attaining a 30-goal mark in this new SPFL season.

The Japanese international has kicked off the 2022/’23 season in style, impressively getting on the scoresheet with four strikes out of the five games as we journey in the course of the campaign.

After just a goal in each of the Hoops games against Kilmarnock, Ross County, and  Hearts, the forward raised his performance further by scoring three goals to add to his record on Sunday.

The 27-year-old performance was superb in the 9-0 demolition of Dundee United as he banged a hat-trick in the first half, which comprises a variety of deadly finishes.

” I’m happy with my performances so far since the start of this new season. I love scoring goals. It is my job to score. I just want to play, compete and give my best for this great club [Celtic].

” This season, I hope to score more goals, and I’m looking forward to setting this target for myself. ” He added.

Ever since he arrived from Vissel Kobe in Japan, Furuashi has been phenomenal, scoring goals and providing assists. Unfortunately, his form dwindled after he suffered a hamstring injury towards the end of December, which kept him out of the team for several months.

Despite all these, the striker finished as Celtic’s top scorer across all competitions with 20 goals to his rank and three above fellow striker Giorgos Giakoumakis.

This season is the perfect chance for Kyogo to achieve his target as Celtic will look to get involved in various conditions, including the UEFA Champions League, where he might get to showcase his skills and also push Celtic beyond the group stages.

Celtic kick off their League cup activities as they travel to Ross County on Wednesday, 31st August 2022.