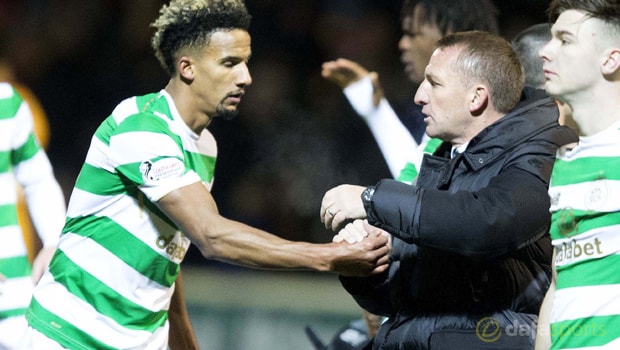 Brendan Rodgers says Celtic’s 1-1 draw at Motherwell showed why they have been so successful during his time in charge.

The Bhoys looked in danger of losing their 65-game unbeaten domestic record when Mikael Lustig deflected Craig Tanner’s free-kick through his own net but Scott Sinclair held his nerve to level with two minutes to go from the penalty spot.

Willie Collum’s decision to point to the spot was met with anger from the Steelmen but replays showed that Andy Rose did appear to foul Callum McGregor, despite the contact being minimal.

It was the second time in as many games that Celtic have faced Motherwell, having defeated them 2-0 in Sunday’s League Cup final.

That triumph made Rodgers the first Celtic boss since Jock Stein to win four domestic trophies in a row but the Northern Irishman has regularly diverted praise back onto his players.

The former Liverpool coach admits there are still areas for improvement, but has hailed the tenacity that runs through his squad.

“We should have been more clinical in the game but in saying that, when you go behind away from home against a tough team, it’s always difficult,” he said.

“But credit to the team – it was a good point for us. You see why the players have achieved what they have and why it is really special. “You can lose a game of football for so many reasons.

Questions were asked but I couldn’t be any more proud of the players as they continually answer questions and show their mentality.”

Ironically, Celtic and Motherwell meet again on Saturday and the Bhoys are 1.18 to win the game, with the draw 7.00 and Stephen Robinson’s men priced at 13.00.