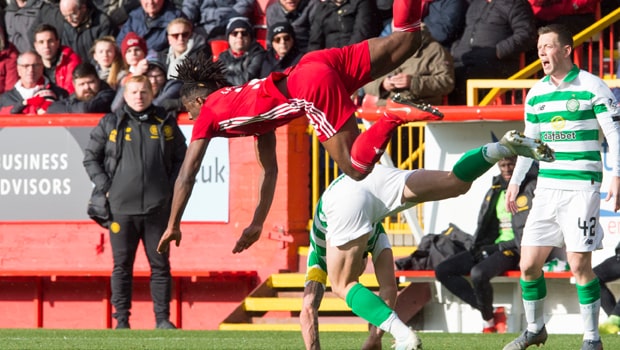 Three games in just about a week is a strain to any club and more so for a club battling to win all the competitions they’re taking part in. Celtic completed their current trial by fire admirably by winning all three of the fixtures, two in Scottish Premiership to start and finish the week, and one in Europa League midweek. Mauling Ross County 6-0 at home was one thing, but beating Lazio 2-1 and then only a couple of days later snagging a brilliant 0-4 victory over Aberdeen on the road was something else.

Celtic boss Neil Lennon was chuffed to bits after the “special” performance by the Hoops in Aberdeen. He deemed his squad as “ruthless”, as they went on to record their biggest win in Aberdeen since 2008. Despite starting a slightly modified squad for the fixture, and missing for example Ryan Christie from the midfield, Celtic started the game strong. It took only ten minutes from the kick-off for Odsonne Edouard to score his seventh goal of the season from the edge of the area. Youngster Jeremie Frimpong added the second after five minutes, with his first Premiership goal in only two starts. Aberdeen was left stranded from the start and Celtic was steamrolling through. To complete the dominating half James Forrest and Mohamed Elyounoussi struck one more time each and finished off the brilliant first half 0-4 for the visitors.

Aberdeen had no means to fight back in the second half and Celtic was in control for the duration of the match. The hosts only managed one effort the whole game and Fraser Forster didn’t much get to participate. Celtic were as prolific as ever, scoring four with their five shots on goal. More importantly, the gruesome week resulted in three victories and no injuries and the squad seemed fit all the way through.

To keep their spot on top of Premiership, Celtic will have to battle in every single match. With Rangers pushing hard at matching speed, there’s a real rivalry ongoing. After Celtic had beaten Aberdeen on Sunday and the ball was in Rangers’ court, they pulled off a comeback win over Motherwell to climb back next to Celtic on top of the Premiership.