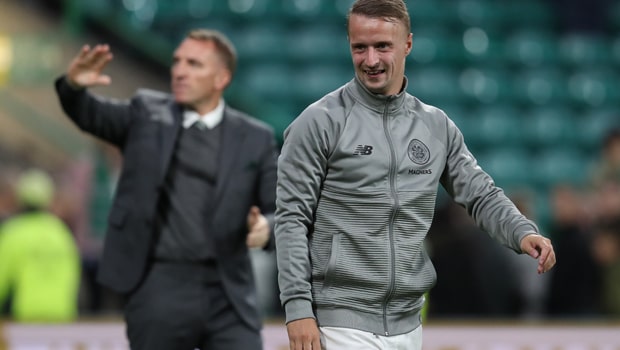 Celtic manager Brendan Rodgers says he is hoping he can have a 100% fit and focused Leigh Griffiths following his new deal at the club.

The striker penned an extended deal with the club last week with Rodgers viewing him as a key figure up front for the Hoops.

Griffiths will have an even more important role for the Scottish Premiership champions this season, following the slightly acrimonious departure of Moussa Dembele to Lyon for £19.7million on deadline day.

He will face a battle with Frenchman Odsonne Edouard for the number one spot up front with Rodgers tending to play with only one striker.

The 28-year-old Griffiths has had a modest start to the season, scoring just twice in 11 appearances, and there have been reports that he is not impressing his manager on the training ground by turning up late to sessions.

And Rodgers says that, coupled with his frustration at falling down the pecking order in the Scotland side, should provide Griffiths with the hunger and challenge needed to get back into the starting line up.

“With the big clubs you’re always going to be challenged,” said Rodgers.

“You can never think you are the number one striker. No, you always have to think you’re being pushed and challenged.

“That’s the way it is. “Big clubs will always have options, you always have to fight to prove yourself every day in training and in every game.

“And if you don’t, and you drop off a level, whatever your fitness or preparation, then there’s always someone else.”

Celtic are in Europa League action on Thursday evening at home to Norwegian outfit Rosenborg and are clear favourites at 1.50, with the away side priced at 6.50, with a draw coming in at 4.33.