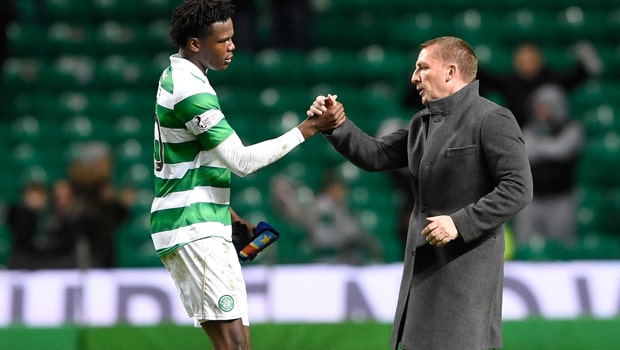 Celtic manager Brendan Rodgers says he knows Dedryck Boyata will “leave at some point” as the defender is “really defined now as a player”.

After struggling to make his mark at Manchester City, Boyata made the switch to Celtic in the summer of 2015 on a four-year contract and he has become an integral part of the first team ever since.

The 27-year-old has made 76 Scottish Premiership appearances – scoring 11 goals – and has won three league titles, two Scottish Cups and the League Cup after beating Motherwell in the final last season.

He was included in Belgium’s squad for the 2018 World Cup in Russia and the defender featured in all three Group G victories over Panama, Tunisia and England.

Boyata and his agent did push for a move away from Parkhead this summer but, unlike Moussa Dembele who was granted a move to Lyon, the centre-back was not allowed to leave.

Now back in the first-team plans, the Belgian has been impressing for the Bhoys and Rodgers knows one of his star men will be heading for the exit door sometime in the future.

“Dedryck will leave at some point. You look at him now and you see he is really defined now as a player who has gained great confidence the last two years, the last 18 months in particular,” he said.

“Going to the World Cup, he has proven there at a good level that he can play with world class players.

He is entering into his years at 28 where he can show it. I have always said when he is concentrated that he is a top class player.”

Celtic travel to Red Bull Salzburg on Thursday for Europa League action and the visitors are 5.50 outsiders, a draw is priced at 4.00 whilst the hosts are 1.57 favourites.