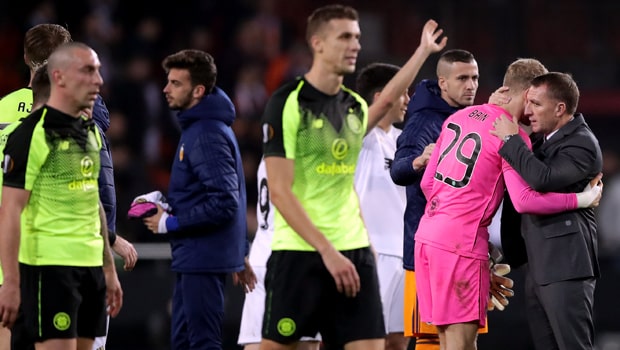 Celtic manager Brendan Rodgers was proud of the performance after crashing out of the Europa League to Valencia on Thursday and has challenged his men to bounce back against Motherwell.

The Bhoys had a mountain to climb in the Mestalla after losing the last-32, first-leg clash 2-0 on home soil a week ago.

History suggested they would be unable to overturn the deficit, having never previously won in Spain, and Los Che ultimately proved too strong. Celtic’s task was made even more difficult when Jeremy Toljan was sent off for a second bookable offence on 37 minutes.

Valencia went on to put the tie out of range in the second period, with striker Kevin Gameiro slotting home from close range. Despite failing to advance beyond the first knockout round, Rodgers felt Celtic put in a good shift for the travelling fans.

“The performance tonight, I think our supporters will be proud of the team, having that courage to come and play. Last week, we started well but mistakes will punish you and that’s what happened last week,” he said.

“You always aim to improve and I think that’s always the case. It’s always going to be difficult for us in Europe, but we never give up hope. The team played very well tonight.”

Attention now turns back to domestic football once again for the defending champions as they look to further cement their spot at the top of the Scottish Premiership.

Celtic have won six on the bounce in the league, keeping clean sheets in all of those games, and Rodgers is relishing the chance to get back to business. “We look forward to Motherwell on Sunday,” he added.

“The players put in a huge effort tonight, but Motherwell will be a fantastic game. They’re on a run and we look forward to the challenge.”

Celtic can be backed at 1.20 to take all three points on Sunday. Motherwell are priced at 15.00 to come out on top and the draw is available at 7.00.