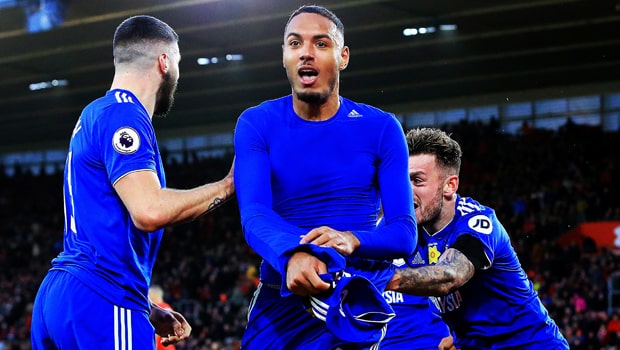 Cardiff striker Kenneth Zohore has talked up the importance of “momentum” as they prepare to host Watford on Friday night.

The Bluebirds have grown over the course of the 2018-19 Premier League campaign and are certainly in contention to avoid the drop.

Cardiff, who are priced at 1.80 to be relegated, currently sit 17th, one point above the bottom three, but they could climb to a lofty 13th spot if they pick up all three points against the Hornets.

Back-to-back victories against Bournemouth and Southampton have helped to breathe new life into the squad after a turbulent month. The players were granted time off during the last fortnight due to their early exit from the FA Cup and should be refreshed for the clash on home soil.

Zohore, who netted a 93rd-minute winner against Southampton last time out, has spoken about the importance of “momentum” and urged his team-mates to use it to their advantage against a strong Watford outfit.

“I think that Watford have been very good this season,” Zohore told Cardiff’s official website.

“They’re very technical and they have played well. “I think that we’re stronger this time around [than in the reverse fixture]. We’re even more together now as a group – we know what we’ve got to do and we’ve done it well over the past couple of weeks.

“We’ve got momentum behind us, with the results we’ve had, and hopefully we can take it on to Friday’s game.

“I always think that we play better at home and we’ve had two wins on the bounce now. Hopefully we can make it three.”