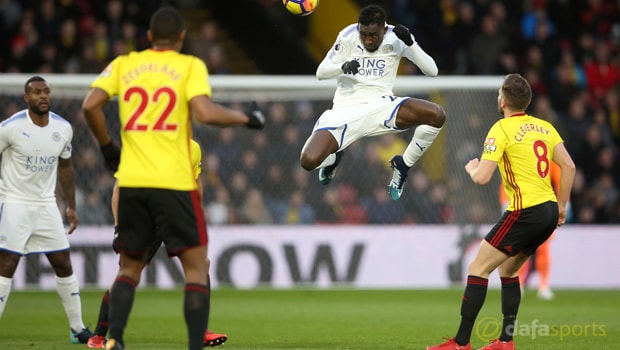 Leicester midfielder Wilfred Ndidi has urged the side to move on from their Boxing Day defeat at Watford and instead focus on Saturday’s away clash with Liverpool.

The Foxes have now gone four games without a win in all competitions following their 2-1 defeat to the Hornets, a result that was made all the more disappointing as Claude Puel’s side had taken the lead during that contest.

Nigeria international Ndidi certainly feels Leicester had more than enough opportunities to emerge from Vicarage Road with all three points, but insists his side must now move on from that defeat and concentrate on this weekend’s trip to Anfield.

“It is very disappointing to lose this game but we will focus on the other games,” he told LCFC TV.

“We had so many chances in the first half which could have sealed it but we’ll work hard now.”

Leicester are currently in the middle of the busy festive programme and Ndidi admits he is enjoying the hectic schedule, something he has not experienced before as he only moved to the King Power Stadium last January.

“I’ve really enjoyed [playing at Christmas], there have been ups and downs,” the 21-year-old added.

“We always prepare for every game. We are always ready.”

The Foxes face a tough test if they are to return to winning ways on Saturday, as they have not beaten Liverpool at Anfield since May 2000, although they did secure a 2-0 Carabao Cup triumph over the Merseysiders on home soil earlier this season.

Leicester are priced at 9.00 to secure all three points on Saturday, while Liverpool are available at 1.33 and the draw is on offer at 5.50.