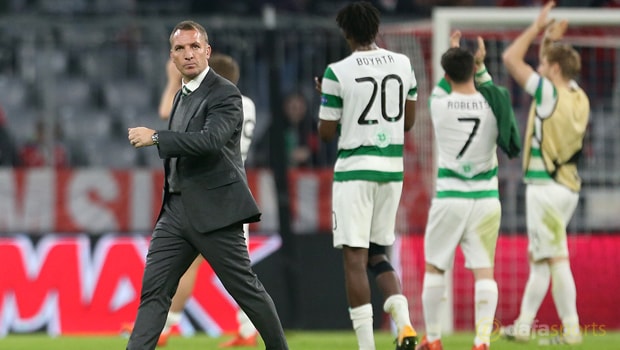 Celtic boss Brendan Rodgers says his team must remain true to their footballing ideals when they face Bayern Munich in Germany.

The Scottish champions are significant underdogs and Rodgers admits they will face a team “packed” with world-class players, but the Hoops boss insists the Bhoys must try and impose their own style of play on the game.

Celtic go into the Group B tie against one of European football’s traditional superpowers with some confidence after a 3-0 win in Anderlecht last month.

Bayern lost 3-0 to Paris Saint-Germain in the French capital on matchday two, a result that saw manager Carlo Ancelotti sacked.

The Bundesliga champions have endured a testing start to the season, but the return of veteran coach Jupp Heynckes for the fourth time as manager has re-energised them as they showed in the 5-0 win over Freiburg at the weekend.

Celtic are level on three points with Bayern going into their double-header and Rodgers knows how tough it will be in the Allianz Arena, but still wants his players to stick to what they know best.

“They are one of the best teams in world football,” he said. “You only need to look at their teamsheet and the quality of their players.

For us, we understand and respect that, but our duty is to play how we play.

“It’s not always easy when you play against these teams, but that’s how we work – we like to attack and defend with aggression.

“I respect it will be a tough game for us, but it’s another game for us in our development as a squad and away from home we have shown that development over the course of the last season.