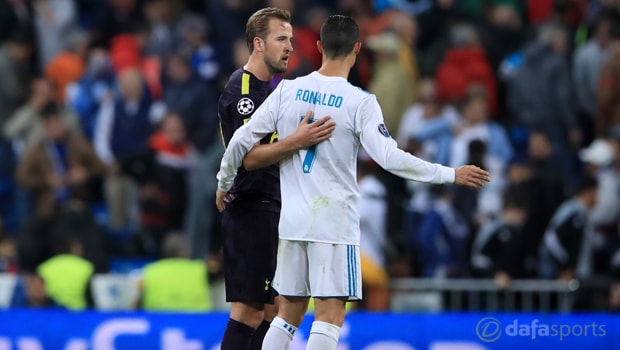 Harry Kane felt Tottenham Hotspur showed they can compete at the elite level in Europe after they held champions Real Madrid to a 1-1 Champions League draw in the Spanish capital.

The result leaves both Spurs and Real in a promising position at the halfway stage in Group H, with seven points each, enough for a six-point gap after Borussia Dortmund and Apoel Nicosia also drew 1-1 in Cyprus.

Kane was heavily involved as Spurs snatched the lead in the first half, forcing Raphael Varane to turn Serge Aurier’s cross into his own net.

Real upped the tempo in the second half and Spurs had skipper Hugo Lloris to thank for some inspired saves that kept Ronaldo and Karim Benzema at bay.

It was by no means one-way traffic and only a fingertip save from Keylor Navas denied Kane a second Spurs goal midway through the second period.

The England forward was in no doubt that the result was a significant one in terms of Tottenham establishing themselves amongst Europe’s big boys.

“A point at the Bernabeu, you would take that every day of the week. It shows how far we have come as a team,” Kane said. “We are happy.

Of course they are going to have chances, but we played well and made it tough for them.

“It puts us in a great position and shows we can handle it at this level.”

Kane is 6.00 to be leading goalscorer in this season’s Champions League while Spurs are now 2.60 to win Group H.