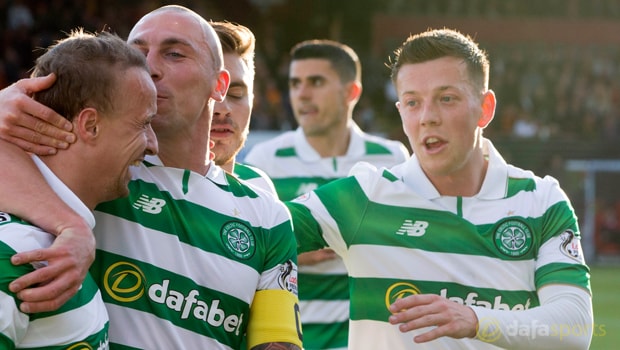 Captain Scott Brown says Celtic’s unbeaten treble-winning squad is the best he has played in during his time at the club.

The Hoops completed their domestic treble with a nail-biting and hard fought 2-1 win over Aberdeen in the Scottish Cup final at Hampden Park on Saturday, Tom Rogic supplying the golden moment with a goal in the 91st minute.

It ensured that Celtic had gone through the entire 47-game domestic season in Scotland unbeaten and lifting all the major honours, the first time any Scottish club had achieved such a feat.

Brendan Rodgers’ first season in charge was also one where the Hoops broke records in terms of points gained and goals scored in the Scottish Premiership.

Brown has won seven league titles, three Scottish Cups and three League Cups with the Glasgow side and the midfielder has no doubts that this latest achievement outranks anything he has experienced before.

“It’s phenomenal,” said Brown. “For the 10 years I’ve been here this is best, most determined bunch of lads I’ve ever played with. “This is the best achievement anyone can ask for.”

Brown credits the arrival of Rodgers into the club for the dramatic turnaround in terms of quality and consistency, and says nobody could have forecast what was coming last summer when they lost a Champions League qualifying first leg game against part-timers Lincoln Red Imps.

“From the start of the season, away to Gibraltar, nobody would’ve expected this,” the Scotland international added.

“But it shows how well we prepared and how much dedication we put into the whole season. “What we’ve just achieved, I don’t think it will sink in for a few days.”