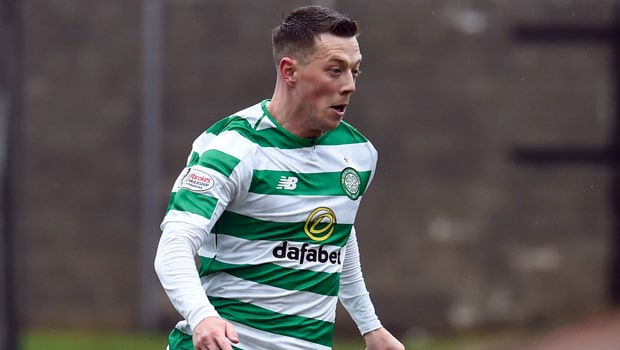 Callum McGregor says Celtic were fully entitled to enjoy Sunday’s Old Firm win over Rangers at Parkhead, while suggesting the Ibrox side must learn to deal with defeat better.

McGregor is adamant that winning and losing in the heat of Glasgow’s derby-day furnace is all part of the game.

Celtic’s domination of the fixture was halted at Christmas when Rangers won 1-0 at Ibrox, the only defeat suffered by former Hoops boss Brendan Rodgers against the local rivals during his tenure.

McGregor says he and his teammates ‘took their medicine’ that afternoon and got out of Ibrox without making a fuss.

“If you look back at the December game, Rangers deserved to win it and they celebrated on the pitch just as much as we did on Sunday,” he said.

“The difference is we took it. “We put our heads down, took our medicine and we got up the tunnel. So in terms of that, the conduct of the Rangers players maybe was not great [on Sunday]. But you can’t tell players ‘you can’t celebrate big victories’.”

Rangers had Alfredo Morelos sent off while Ryan Kent escaped a red card for striking out at Hoops skipper Scott Brown after James Forrest’s later winner.

The Gers winger is facing a two-game retrospective ban for his actions. Andy Halliday became embroiled in a shoving match at full-time having taken exception to Brown’s celebrations, the Light Blues midfielder receiving a second yellow card in the tunnel afterwards.

McGregor felt nothing untoward had been done by the home team upon the final whistle. “The other day that the game finished over in that corner [where the away fans were situated],” said McGregor.

“Nobody ran to anywhere else in the stadium. They celebrated where they were on the pitch and in my eyes there was nothing wrong with anything that any of the Celtic players did.”

Celtic are back in action on Wednesday evening at St Mirren, where they are 6.50 to win the game 3-0.