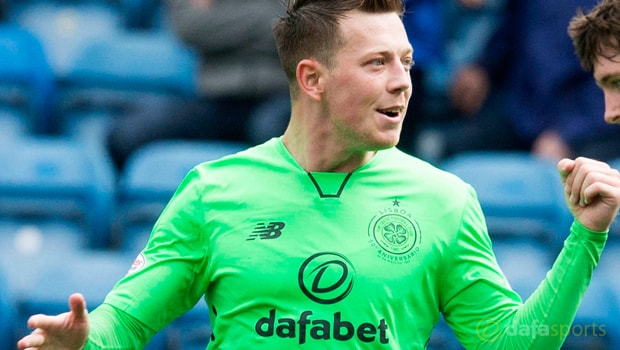 Celtic have confirmed that Callum McGregor has signed a new contract which will keep him with the club until 2021.

The midfielder came up through the ranks at Parkhead and following a season on loan at Notts County, made his first team debut in 2014.

Having spent time on the fringes of the line-up, the 24-year-old established himself as a regular last season under Brendan Rodgers and has continued that form into the current campaign, scoring three times already.

McGregor was on the bench for Tuesday’s defeat to Paris Saint-Germain and was also recently overlooked by Scotland boss Gordon Strachan.

However, he clearly has the faith of Rodgers after being handed a new four-year deal, joining Scott Brown, Stuart Armstrong and Jozo Simunovic, who have also extended their stays in the east end of Glasgow.

The midfielder admits he is now keen to kick on with the club and help the Bhoys claim further silverware under Rodgers.

McGregor told Celtic’s official website: “Celtic has been part of my life for so many years and as I’ve gone through the levels club really has become my home.

I really wanted to make sure I continued to be part of such a great club and it’s a huge honour to sign this new contract.

“The gaffer has been great here in the past year and I’m totally focused now on continuing to work with him and the staff to always improve personally as a player and work as a team to bring more and more success to our supporters.”

McGregor will be hoping to reclaim his place on Saturday when Ross County come to a Parkhead for a game Celtic are 1.13 to win, with the draw 8.00 and the visitors 19.00.