Brendan Rodgers: That’s our best yet 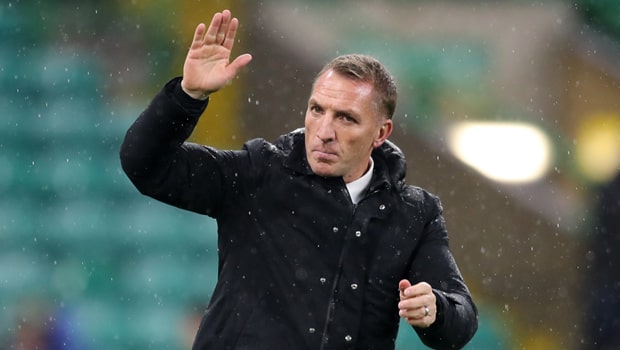 Celtic manager Brendan Rodgers felt a 2-1 win over RB Leipzig in the Europa League on Thursday evening was the standout European performance of his tenure as Hoops boss so far.

The Scottish champions desperately needed the win to stay in the hunt for a last-32 berth and they got it, with goals from Kieran Tierney and Odsonne Edouard.

Celtic led early on but appeared to have been dealt a blow when Jean-Kevin Augustin levelled with just 12 minutes to play.

Straight from the restart, a flowing moving down the Celtic left ended when the impressive Ryan Christie squared for French forward to Edouard to tap home, ensuring Celtic and Leipzig now have six points apiece in Group B with two games each to play.

Asked if the triumph was the best European triumph of his two-and-a-half years in Glasgow, Rodgers said: “I couldn’t argue with that.

“If you look at the level of our opponent and you look at our performance. We showed no fear against a very good side and brought our identity to the team.”

Celtic head next to Norway to face Rosenborg, who have lost all four games so far after shipping five goals to runaway group leaders Salzburg on Thursday.

Rodgers feels his players merited the victory over last season’s quarter-finalists Leipzig and suggests they showed genuine mental strength to achieve it.

“Some of our football was fantastic and they kept fighting to the very end. When you press as a team, you can have no ego in the team,” he added.

“We spoke about it (the possibility of losing a goal) before the game and said that you have to respond when things go negatively in the game.

“That’s the mark of a good player. When things go against you, you know you have the fight and the spirit.”