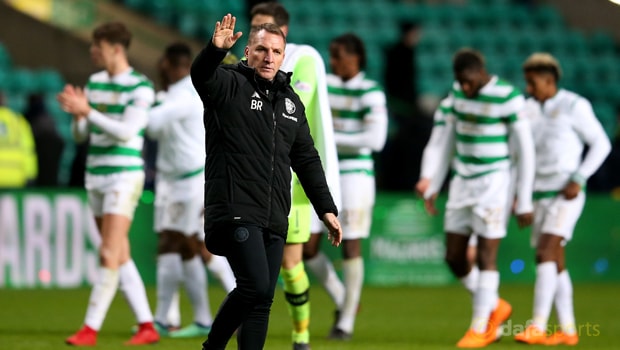 Celtic boss Brendan Rodgers says he already anticipated a tougher challenge from Rangers next season, irrespective of Steven Gerrard taking over at Ibrox.

The former Liverpool and England skipper has been confirmed as the new Rangers boss and he’ll take up his post next month.

Celtic have been crowned Scottish Premiership champions for the seventh year in a row and Rodgers’ side will face Motherwell in Saturday’s Scottish Cup Final at Hampden Park, chasing a second domestic treble under the steer of the former Liverpool manager, with the Parkhead club never before winning back-to-back trebles.

Rangers, meanwhile, ended the campaign third under caretaker boss Jimmy Nicholl, who succeeded Graeme Murty for the final weeks of the season following back-to-back hammerings from Celtic in the Scottish Cup semi-final and a Parkhead league encounter that saw the Hoops crowned champions.

Murty had only been in interim charge until the season’s end having replaced Pedro Caixinha after the Portuguese was axed before Christmas.

Asked if he expected the arrival of Gerrard at Rangers to increase competition, Rodgers said: “I would expect whoever was in charge at Rangers for it to be tougher.

“That’s how football works, each year it gets tougher and more difficult and that will be no different, whoever was taking charge, whether it was Steven or anyone else.

“The competition was always there and it will be next season. We have to improve again next season which we will do, both individually and as a team.”