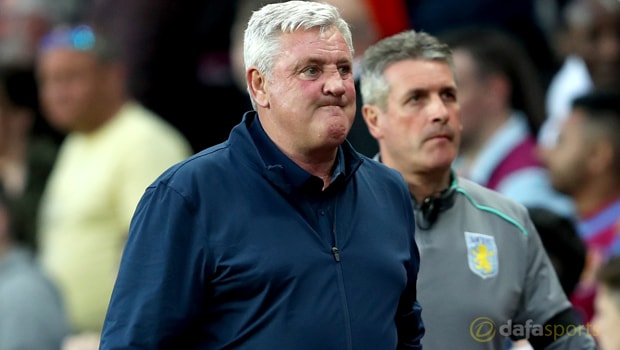 Aston Villa fully deserve their shot at securing promotion back up to the Premier League when they take on Fulham in the Championship play-off final, says manager Steve Bruce.

The Villans are within 90 minutes of returning to the top flight after they played out a scoreless draw with Middlesbrough at Villa Park in their semi-final second leg on Tuesday.

It meant Bruce’s side held on to win the tie thanks to Mile Jedinak’s first-leg header at the Riverside Stadium.

The second leg was a game of few clear-cut chances, and Villa enjoyed the best of what was on offer.

They did, however, have to survive a late scare from Tony Pulis’ team. Home goalkeeper Sam Johnstone was adjudged to have handled Adama Traore’s attempted chip outside the box, though he earned only a yellow card from referee Mike Dean.

Stewart Downing crashed the resulting free-kick against the crossbar, before it rebounded away to safety.

It was a rare moment of threat from Boro and Bruce was adamant his side were worthy of their victory, while admitting Johnstone is perhaps fortunate not to be missing the Wembley decider.

“It [Sam Johnstone’s handball] probably should have been a red card, but, with only two minutes left, it might not have made much difference,” said Bruce.

“They only had one shot on target in two games and we had the better chances tonight. If any team deserved to win, it was us.

“I’m delighted for our fans who have suffered a lot. Now we’ve got 11 days to prepare for Wembley.”

Fulham stand in their path ahead of the ‘richest game in football’ and Bruce has no qualms that both clubs are in good stead to return to the big-time.

“It’ll be very difficult against Fulham but it’ll be two football-playing teams and we hope to give them a game and show what we can do too,” he added.

“If you win in a play-off final, it’s a great way to do it, but, if we are to win, we are going to have play very well.”

Fulham are favourites at 1.70 to win promotion to the Premier League, with Villa priced at 2.10.