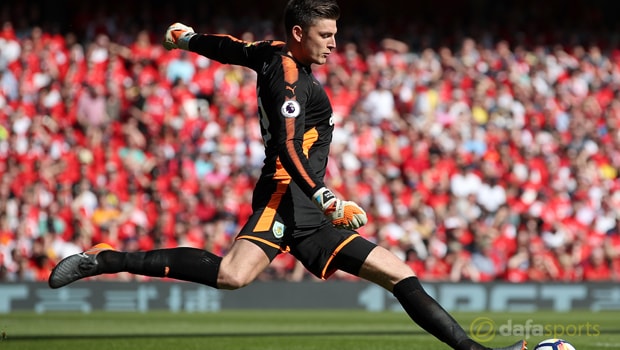 Burnley’s Nick Pope admits that a year ago he couldn’t have even dreamed about going to the World Cup with England.

The Clarets’ shot-stopper has enjoyed a stellar season as the club secured seventh spot in the Premier League and a shot at Europa League football for next season.

Tom Heaton’s shoulder injury handed Pope the chance to grab the gloves through much of the season at Turf Moor and it was a chance he seized superbly.

The reward was an England call-up for the March double-header friendlies against Germany and the Netherlands, something he admitted gave him belief he could make the cut for Russia.

There has been widespread speculation that former stalwart Joe Hart will be left out of the England squad when Gareth Southgate announces his 23-man squad for Russia on Wednesday.

Jordan Pickford and Jack Butland look set to travel as first and second choice, leaving the uncapped Pope to scrap for the third spot.

The 26-year-old admits there is now a sense of what might become a reality for him.

“At the start of the season you’re looking at being a number two goalkeeper and possibly getting a handful of games over a season so it’s something I couldn’t even dream about then,” he said.

“But as I sit here I’ve maybe got half a chance of getting on the plane and going to Russia, which would be a massive achievement in itself, let alone playing.”

Pope revealed the March get-together was an “open environment” and said he’d enjoyed a long talk with Southgate at that time, with the Three Lions boss telling him to work hard until the season was over and see where it took him.

If the call doesn’t come, Pope said he won’t let it get him down.

“If I hadn’t made the squad in March I would be sitting here thinking I’ve got a very small chance but to make that squad gave me a little bit of hope,” he added.

“Fingers crossed something comes but if not I get to enjoy my holidays feeling fresh and ready to go again.”