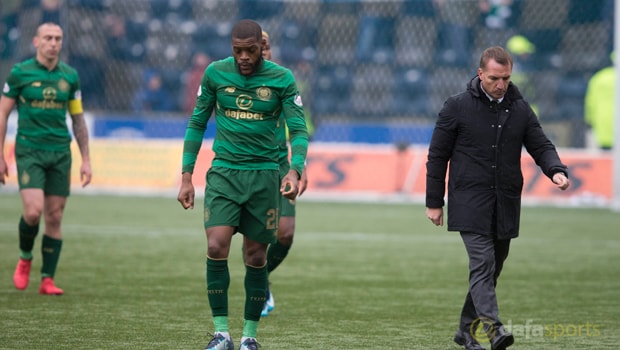 Brendan Rodgers admits Celtic’s injury problems are mounting ahead of their Europa League clash with Zenit St Petersburg, but he will not allow eyes to be taken off the defence of their Scottish Cup crown as a result.

Central defenders Dedryck Boyata and Kristoffer Ajer were both forced off in last weekend’s 1-0 Scottish Premiership loss at Kilmarnock, just the second domestic defeat of Rodgers’ tenure in Glasgow.

The Hoops boss does not expect Boyata to recover in time for next Thursday’s visit from Russian giants Zenit.

“I don’t think he will be,” the Celtic boss told a press conference when asked if Boyata would make that game, “the medical team are saying it is probably going to be around a couple of weeks.”

Ajer may be fit enough in time to return for Saturday’s Scottish Cup last-16 tie against Partick Thistle at Parkhead, but Rodgers is without plenty of his key men.

Rodgers will not be taking the Glasgow derby against the Jags lightly.

“One or two of the guys have started to return to training, the likes of Tom Rogic and Patrick Roberts, but they are still a wee bit of time off the games,” he added.

“We will put a strong team out. I am always confident that whatever team we put out will look to get the result.

“I think it has just been one of those seasons for us, we have had a number of injuries this year so it is a lot of bad luck really.”

Celtic are 7.00 to beat Thistle 3-0 in Saturday’s clash, with Partick priced at 12.00 to dump out the cup holders on home soil.