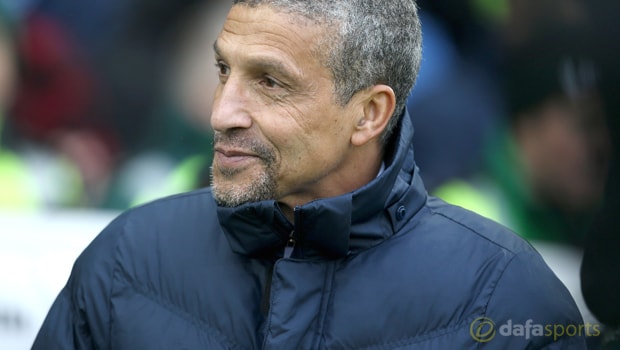 Brighton boss Chris Hughton anticipates his side will have their work cut against an improving Stoke City outfit on Saturday.

The Seagulls travel to the bet365 Stadium this weekend with Stoke’s fortunes having improved since Paul Lambert replaced Mark Hughes last month.

According to Hughton, they have not yet managed to get the results that their performances under the former Aston Villa and Norwich boss may have merited.

“I’ve watched Stoke’s last few games, a new manager has come in and they are playing a different formation (than under Hughes),” said Hughton.

“Their performances have been good. They were unlucky to lose at Bournemouth and were up against a good Watford side at home before that.

“And if we are to get anything from the game, we’ll have to be on our game.”

With the talents of Xherdan Shaqiri to spearhead their attack, Hughton feels Stoke are benefitting from Lambert’s willingness to play on the front foot and an apparent change in tactics.

“Stoke are playing at a high tempo, pushing players through from midfield and have a talented front three,” the Brighton boss added.

“Paul, who I followed as manager at Norwich, generally likes to play on the front foot. An attacking style and getting players forward – an entertaining style of football.”

Brighton ended a winless spell last weekend when they defeated West Ham at the Amex Stadium, while Stoke have collected four points from nine on offer so far under Lambert.