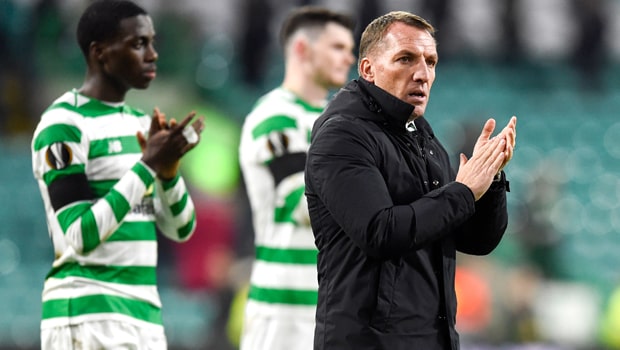 Brendan Rodgers felt ‘basic mistakes’ and a lack of concentration were significant factors after Celtic slumped to a 2-0 home defeat by Valencia in the Europa League.

The Hoops hopes of a place in the last 16 are dangling by the thinnest thread – they have never won a competitive European game on Spanish soil – after goals from Denis Cheryshev just before the break and Ruben Sobrino early in the second half saw Valencia leave Parkhead with a commanding lead.

Celtic started quite brightly but were unable to penetrate their hosts and Los Che soon found their feet and began to dominate possession.

A botched offside trap allowed Sobrino to tee-up Cheryshev for a simple opener and the Russian repaid the favour with a sublime cross for the debutant to volley home and double the lead.

“It was a disappointing game to lose considering we made a good start. We were bright, had a good intensity in our pressing and we circulated the ball well.

Despite their record on Spanish soil, Rodgers said Celtic must try and get the first goal in the Mestalla next week and ask a question of Valencia.

“We will dust ourselves off and enter the game next week with the personality and belief we can get something from the game. If you take away the two mistakes there wasn’t a lot in the game. You have to have that belief at this level,” he added.

“We have good players and might have one or two back next week. We need to defend and concentrate and, like I say, if we get a goal it might set us up for a really good second leg.”